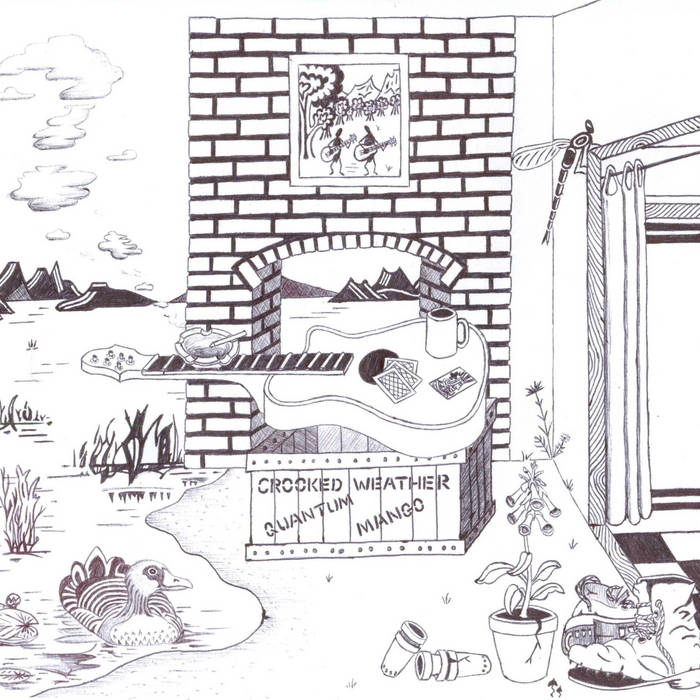 Martin Schwaller Talented and creative band. saw them at the Filey Folk Festival this year....the best at a festival full 9f excellent performances. if you get the chance go see them. Sadly the recordings suffer from being poorly recorded, but never the less worth getting

Will spent most of 2012 in Australia; Danny spent most of his year with maps, cigarettes and delicacies from Greggs. These experiences inform the first Crooked Weather album, ‘Quantum Mango’, written in the latter part of the year. They convened in Hull in early 2013 to record it with the prolific Stewart Baxter (of the Warren Project) and with the veteran recordist John Cox in his hallowed Cupboard studio. The result is consummate Crooked Weather, equal parts chops, unruliness and earthy rhythm.

All music written by Crooked Weather 2013
Tracks 1,2,3 & 9 recorded and mixed at The Warren Studio with Stew Baxter.
John Cox recorded and mixed all other tracks and also mastered the album.
Artwork by Jaybze
Special thanks to Bari, Bill and Kate
Newton apple, Quantum mango.
www.crookedweather.com

Crooked Weather play earthy, unruly and original folk songs. Often travel and adventure, both without and within, have been a mainstay of the inspiring antics that Crooked Weather draw upon for their craft. The songs echo the ethos of folk songsmiths before them with imagery of escape, companionship and searching, but told from a new heart. ... more

Bandcamp Daily  your guide to the world of Bandcamp

Serena Cherry debuts her black metal project, plus a Pick from the Crypt block from Svalbard